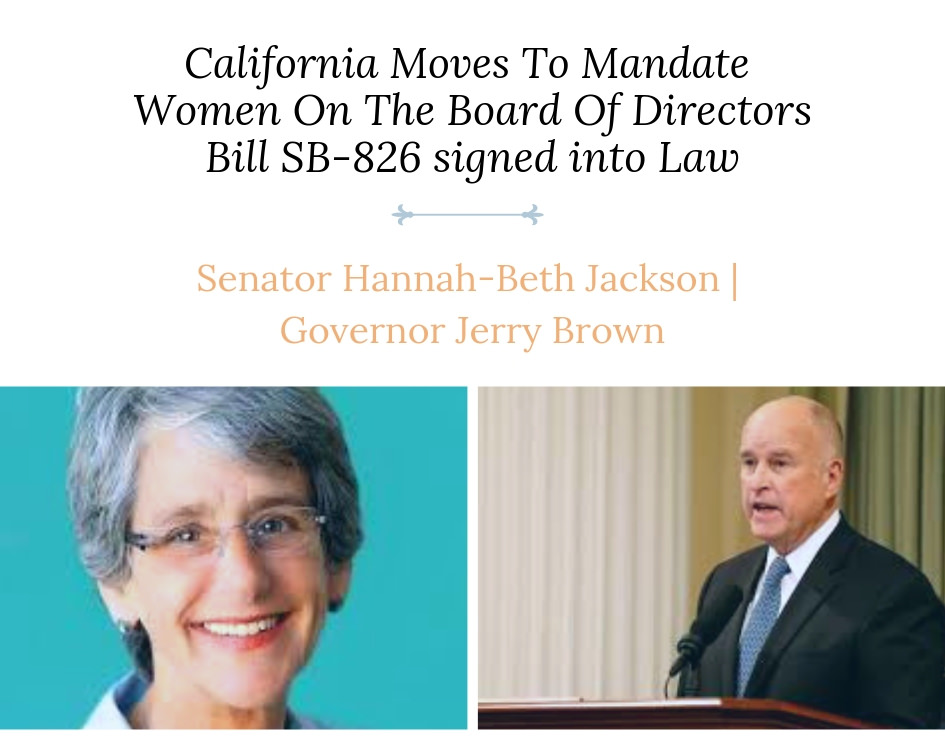 California legislators on Wednesday passed a bill that requires major companies based in the state to put female directors on their boards.

If the bill is signed into law by Gov. Jerry Brown, a Democrat, publicly traded companies based in the state will need to have at least one woman on their boards by the end of next year and, on boards of five or more directors, two or three women by the end of 2021, depending on the board’s size. Those that don’t would face financial penalties.

The bill passed the state Assembly in a 41-21 vote. It is now headed to the state Senate, which approved an earlier version of the bill and is expected to approve the measure again there before it heads to Mr. Brown, who hasn’t indicated his position.

“One-fourth of California’s publicly traded companies still do not have a single woman on their board, despite numerous independent studies that show companies with women on their board are more profitable and productive,” said state Sen. Hannah-Beth Jackson, a Democrat representing Santa Barbara. “With women comprising over half the population and making over 70% of purchasing decisions, their insight is critical to discussions and decisions that affect corporate culture, actions, and profitability.”

The measure, which was opposed by several business groups, could accelerate the diversification of boardrooms around the country. The U.S. has no federal requirement for female representation on company boards and no other U.S. state has successfully pushed such a mandate. California’s move follows similar legally binding quotas that have been set in several European countries.

Opponents of the mandate, led by California’s Chamber of Commerce, argued that while they agree with the legislation’s intent, a quota-based solely on gender takes into account only one element of diversity and would violate the U.S. and California constitutions because it could conceivably put companies in the position of turning down a male board candidate or displacing a male board member based on his sex.

The legislation itself provides for creating an extra board seat to accommodate a new female member instead of removing a man already on the board.

Countries including France, Germany, and Italy have enacted more stringent mandates for women on corporate boards in recent years. In the U.S., even some staunch advocates of boosting the numbers of female directors have been reluctant to endorse board quotas.

Among firms in the Russell 3000 Index, which includes most public companies on major U.S. stock exchanges, 485, or 17%, had all-male boards in the second quarter, according to Equilar, a research firm that gathers data on executives and boards. California is home to 86 companies in the Russell 3000 that don’t have any women on their boards, including shoe-maker Skechers USA Inc., entertainment technology firm TiVo Corp. and Stamps.com Inc., which sells printable postage.

TiVo said it takes diversity seriously but because it is undergoing a publicly announced review of strategic alternatives, the company isn’t actively looking for new board members. Skechers declined to comment, and Stamps.com didn’t respond to requests for comment.

Many large corporations based in California, including Chevron Corp., Netflix Inc. and Alphabet Inc.—the parent company of Google and YouTube—already have multiple female directors. Though the proposed law immediately affects a limited number of companies, its passage would put further pressure on Silicon Valley’s startups to bring gender diversification to their boards before going public.

Last week, San Francisco-based Airbnb Inc. appointed its first female director—Ann Mather, a former Pixar Animation Studios finance chief who serves on several other boards—making good on a pledge made earlier this year to add at least one woman to its board in the near term. The company has been making preparations to go public as early as mid-2019.

If signed into law, the California mandate will likely help fuel similar movements elsewhere. Massachusetts and Illinois have passed nonbinding resolutions that push companies to improve the gender balance of their boards. A number of big investors, including State Street Global Advisors and BlackRock Inc., have pressed firms with all-male boards to change, in some cases withholding proxy votes.

More women are joining boards, spurred in part by pressure from investors. Women accounted for 35% of all new director appointments at Russell 3000 companies during the second quarter, up from 32% in the first quarter and 29% in 2017, according to Equilar. The share of companies in the index with all-male boards fell below 20% for the first time this year, down from nearly a quarter in 2016.

Despite the increase, the overall share of women on boards has ticked up only slightly, to 17.7% in the second quarter from 16.2% in the year-earlier period. Board recruiters say the lack of turnover is slowing change. The average director at an S&P 500 company stays on more than eight years and the majority of boards have no term limits, according to Spencer Stuart, an executive recruitment firm.

By contrast, the number of women on big-company boards in Italy, Germany and several other European nations has tripled and, in some cases, quadrupled in recent years as mandates have forced corporations to boost the share of female directors to as much as 40%.

In the U.S., some diversity advocates have cautioned that legal mandates could undercut more organic, economics-driven efforts to spur change. Rakhi Kumar, a senior managing director at State Street who oversees its board-diversity efforts, has said that on average, large European companies continue to have fewer women in senior executive roles than their U.S. counterparts. All public companies are required to have a board of directors that represents shareholders and oversees company management.